Hilarious, contemporary re-imagining of Shakespeare’s most famous speech – but from a mother’s point of view! A highly entertaining one woman show everyone can relate to whether you are a mam, were a mam, have a mam or know a mam! 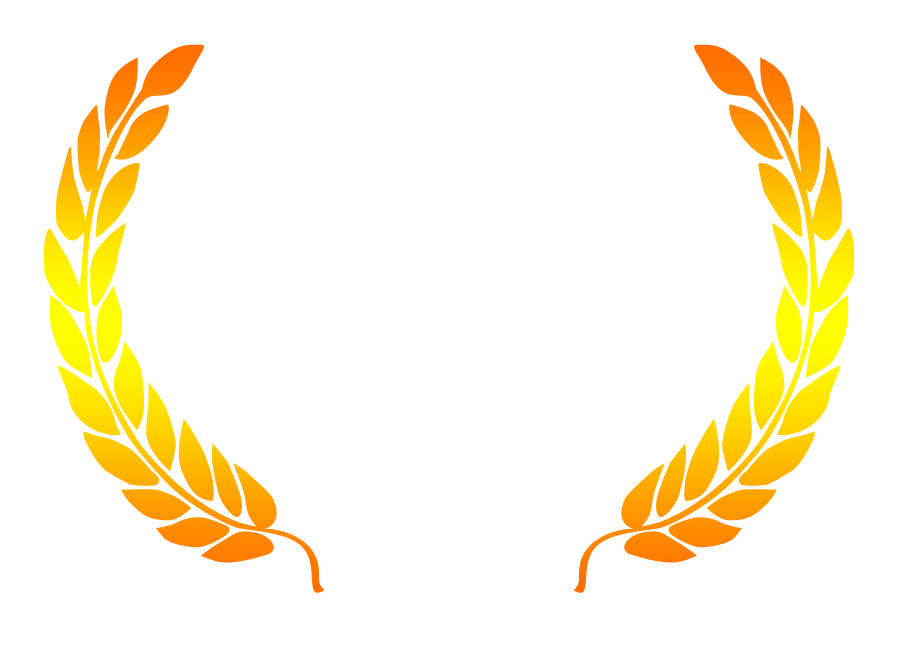 “MUST SEE SHOW… wondrously inventive, light-seeming yet plangent exploration of motherhood, grief, lust, heartbreak and flickers of joy….What O’Driscoll is master of is pause and sudden tangent. The surprise monologue, the hilariously detailed aside, the squirm of embarrassment, and the language of love and forgiveness and letting go. What O’Driscoll brings even more than the humour is the sudden abiding grief. And what she gets more than grief, is life-affirming humour, and what she gets most is utter exhaustion…. No she’s of a piece. This is consummately acted, wholly believable, the most original riff on the Seven Ages I’ve seen.”

Causing you to roar with laughter one minute and tugging on your heartstrings the next, in this emotional roller coaster of a show a mother talks directly to the audience, reminiscing about her life as a woman, a daughter and a mother and reflecting on what has or has not changed across the generations vis a vis the role of women & mothers in society. Audience reactions so far have been phenomenal, as evidenced by all the recommendations for the show on  Seven Ages of MAM FB Page.

Like Jacques, in  Shakespeare’s “As You Like It” Mam divides her life into seven ages:- the Infant, the schoolboy, the lover, the soldier, the justice, the old Man and the invalid but puts her own spin on it resulting in an intimate, topical, relevant, bittersweet exploration of all that it means to be a mother. The highs, the lows, the frustrations, the joys, the sacrafices, the mistakes and the rewards.

A topical, relevant, female centric piece that everyone can relate to. Mam has alot to say…. she reflects on the Marriage Bar; the 8th Amendment; caring for the elderly; gender inequality; gender identity; ageing and death; raising children in an age of social media and #MeToo all intercut with the universal themes of motherhood such as the struggle to hang on to your personal identity; the losing of your name; pregnancy & child birth; relationship strain; breast feeding and cabbage leaves; the vagaries of homework; parental duty; self – worth; and the role of parents in general & mothers in particular in moulding the next generation. It is an intimate, honest, hilarious, thought-provoking and moving exploration of what it means to be a Mam and all the stages of that journey. 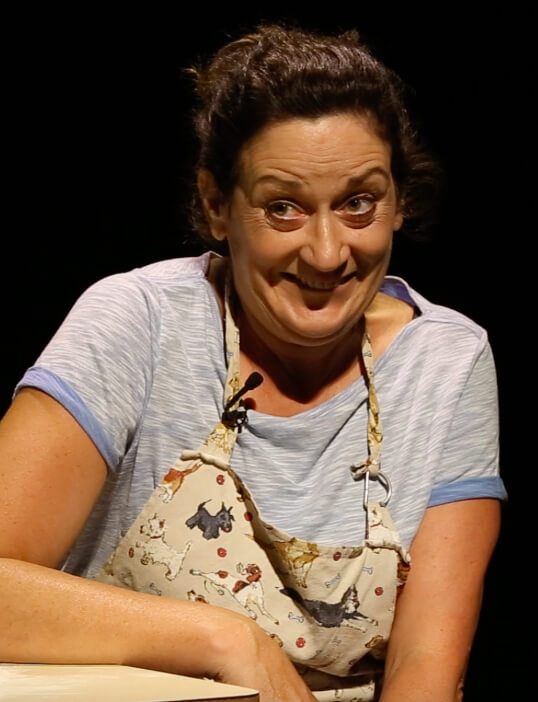 “Oops, maybe I shouldn’t have said that” – Credit: Maciek Klich

“Beautiful, so real and personal and intimate…… really great”

“Pauline holds her audience in the palm of her hand. She is a natural story teller and we just want more”

“Brilliant, I was lucky enough to see the development of this show at the TDC and at Cork Arts Theatre … it is a beautiful, well-crafted piece of theatre with a stellar performance from Pauline O’Driscoll. The audience join her willingly on the journey through her stages. I laughed and cried and next day took my mum to lunch. Go see it”

“Particularly impressive, funny and moving by turns …. completely connected with her audience …. excellence and originality”

“Pauline O’Driscoll is such a powerful performer, with great physical and vocal presence, that her energy fills the space, carrying the audience on this journey that is both ordinary and remarkable at the same time”

“Staggeringly brilliant, I genuinely laughed and cried and felt it was written for me, but then looked around and saw every other woman in the theatre nodding in agreement too.” 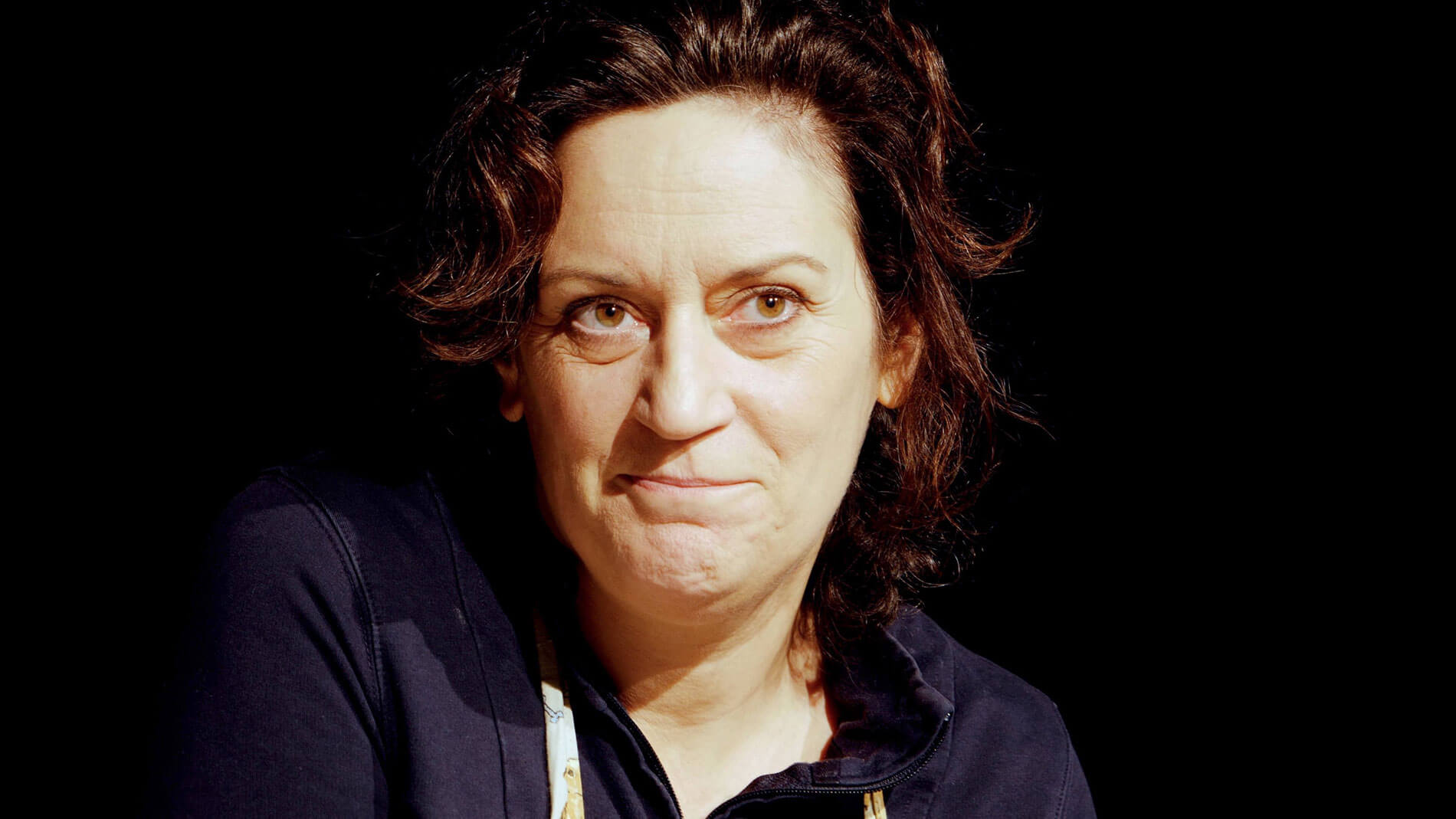 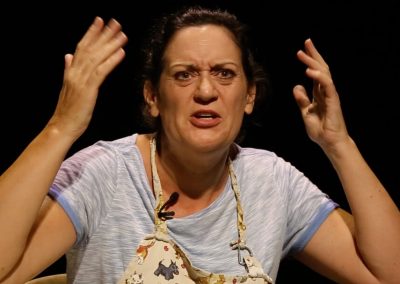 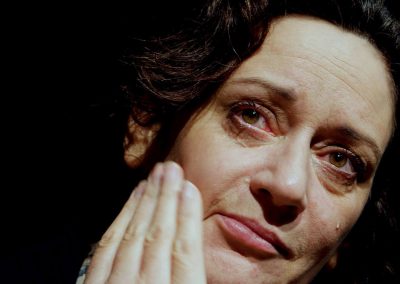 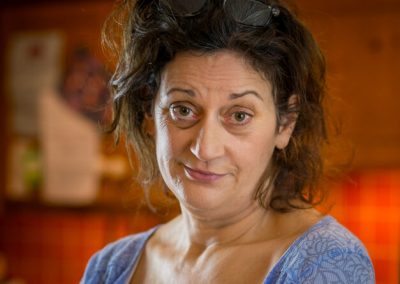 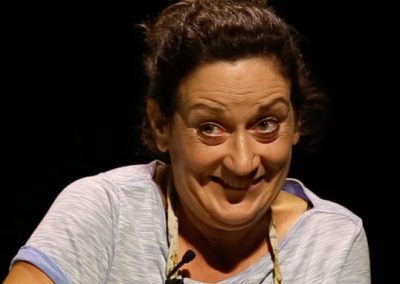 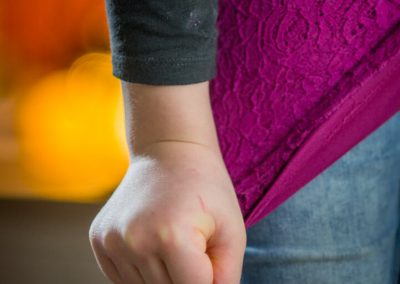 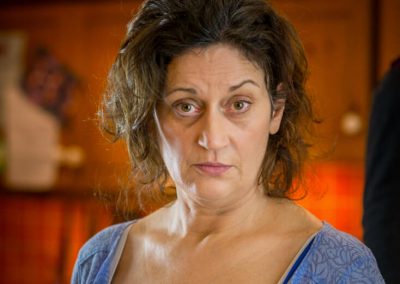 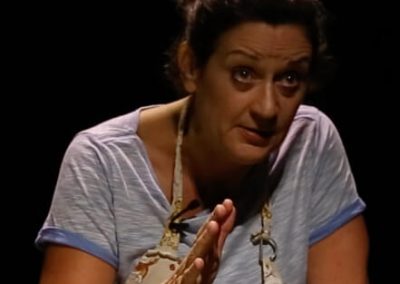 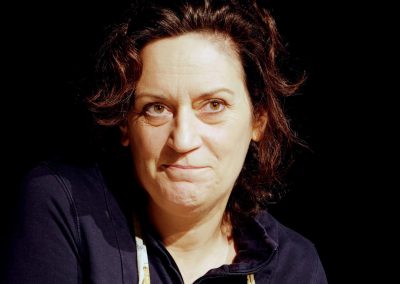 Pauline is an internationally trained actress with over 27 years of experience in the industry. Although a native of Cork, Ireland, Pauline has spent much of her career performing abroad having trained and worked as an actor in both the USA and UK before returning to Ireland. She studied directly under the renowned Uta Hagen while completing a 3 year Performing Arts Course at the Herbert Berghoff Studio in New York. She went on to perform both on and off Broadway before moving to London to continue her careeer and earn an ALAM Diploma from LAMDA, UK. In addition she also has a Bachelor of Commerce Degree (2.1 Hons) from University College Cork and a Diploma in Marketing from the Chartered Institute of Marketing, UK.

RECENT TV CREDITS include: – TV3’s IFTA nominated drama series SMALLTOWN as Mary, the big – hearted and resilient matriarch of a rural Irish family opposite Pat Shortt and as the straight talking but weary hospital consultant who tries to talk some sense into RTE/BBC/Peter Foott’s  THE YOUNG OFFENDERS. She plays Maureen in Emma Walls’ soon to be released, award winning short film script PAT opposite Moe Dunford & Rosaleen Linehan.

OTHER FILM & TV CREDITS include: Busman’s Holiday; Art of Love; Selling Silence; Blackout; Staccato, Slices, There’s Something About Patrick, and The Consultant.

As an Irish Examiner journalist Mark’s features have been published in Ireland, USA, South Africa & Australia. He has written a number of award – winning short plays: Oblivion, Fade to Black, 73 Seconds, Reverse Psychology and The Light Keepers. He had also written award winning short stories, the non-fiction book Inquisition and is the author of the Mrs God sci-fi novels.

Tom has had long and distinguished international career as an actor, director, producer, casting director, acting coach/teacher and as owner/artistic director of the Court Theatre in Los Angeles for over 20 years. He received a MA in Theatre Education from NYU and is currently researching acting techniques and processes and how they help the artist reach the deepest levels of the creative subconscious and create the most expressive and pure performances for his practice based PhD through the Theatre Studies Dept of UCC . He has directed and produced plays in LA, NYC, London, Dublin and Cork. Tom studied acting at the Neighbourhood Playhouse in NYC and trained directly with Sanford Meisner, Lee Strasberg and Stella Adler in their private professional classes.

Alan began his lighting career at the age of 16, lighting Dion Boursiquot’s The London Assurance in his parish production in Limerick. He moved on to light several shows for the UCC Dramatic Society winning two Lighting Design awards at the national level for An Tríal and Harold Pinter’s Hothouse in addition to designing for theatres in Belfast, Dublin, Galway and Cork for the ISDA’s (Irish Student Drama Association). He also designing several shows for theatre company’s in Cork and the Drama and Theatre Studies Dept, UCC. Other selected credits include : – No Boarders, Everyman, Cork and Smock Alley, Dublin; He designed The Pillowman, The Carneigie , Kenmare, An Tsaibhairc, Galway and Cork Arts Theatre, Cork. Alan is currently designing for the Cork Opera House for an upcoming piece in March of 2019. 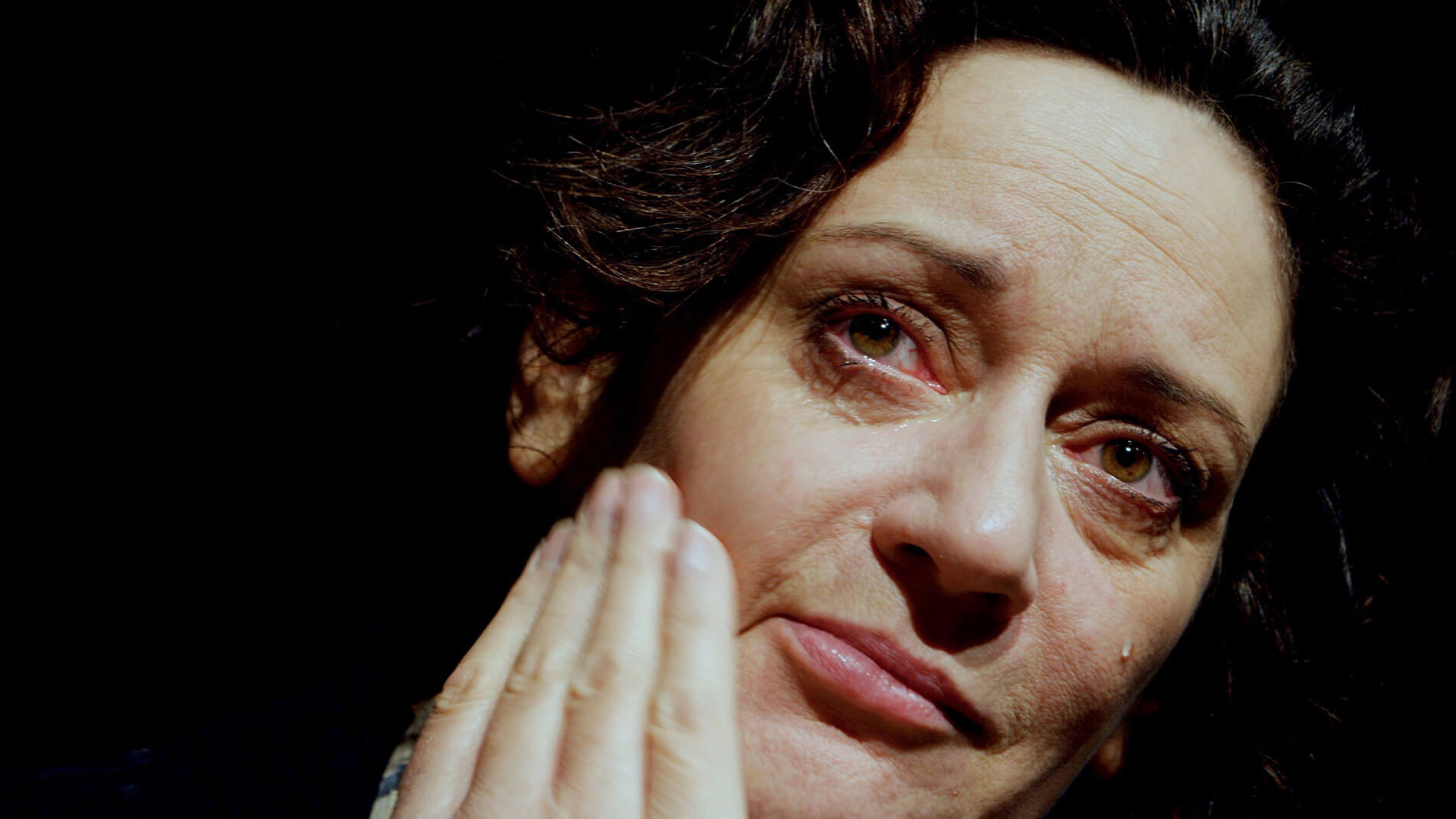