Why should you train with me?

Well I’ve been at this acting malarkey a long time so yes I have 20+ years of training, experience and credentials but I also came to it late having had a different life before (more on that later) and I’ve trained and worked in the USA, UK and Ireland so the chances are I’ve been exactly where you are at now (wherever that may be on the experience scale) at some point in my journey, so I get it, I really do! 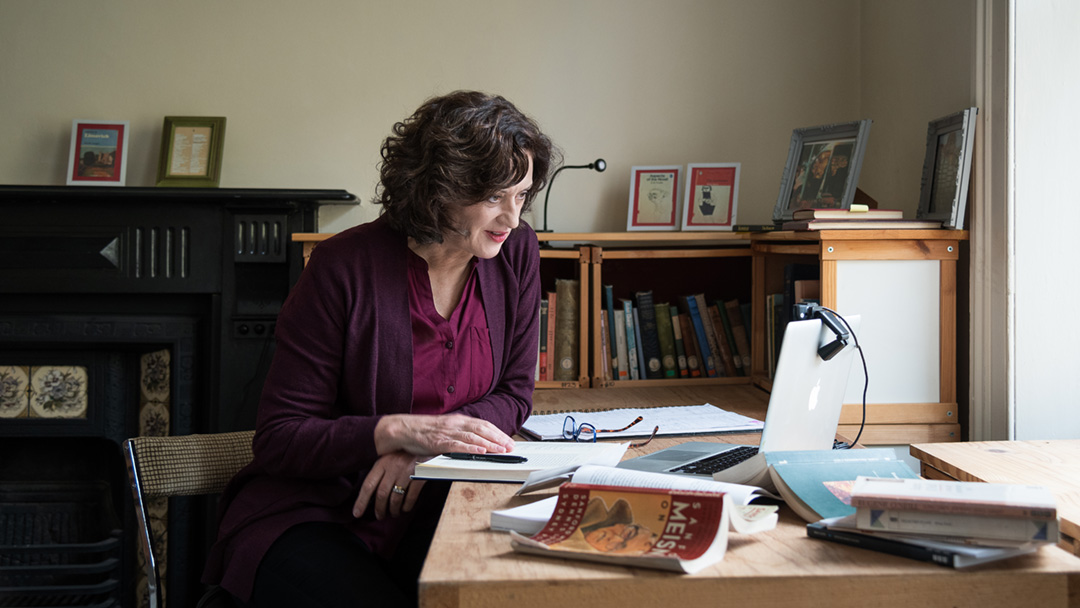 I am a native of Cork, born and bred, but I’ve spent much of my career based in New York and London having had the extraordinary luck and privilege to study directly with the renowned Uta Hagen at the Herbert Berghof Studio in New York, in fact I am the only acting coach in Ireland who trained directly with her.

How did that happen you ask?

Well, despite being desperate for some form of creative career I had done everything like you are “supposed” to, like my parents wanted me to…
I’d been sensible and gotten a business degree (B.Comm Hons) from UCC and was busily climbing the marketing ladder in the UK ( I’d reached the dizzying heights of Market Manager) when I thought…

“Is this it? Is this my life, I just keep being promoted, and then I die? What happened to all my dreams of doing something more, something really creative, something that lit me up?”

I quit my job, sold my house and began a round the world trip to “find myself for a year” as my father said at the time.

And find myself I surely did, when while being an au pair, tequila slammer girl, ski wear model and ski bum in Aspen, Colorado I took an acting class with an acting coach who was visiting from New York. Her name was Alice Spivak and she had trained with Uta Hagen.

Within 3 months I’d moved to New York, where I continued taking class with Alice, auditioned for and was accepted into the 3-year full-time course at HB Studio with Uta Hagen and began my now 28 year love affair with all things acting.

I studied with Uta from 1992 – 1995 progressing through her technique and scene study classes until I was honored to be invited to audition for and join the upper echelons of her Advanced Scene Study and Advanced Shakespeare classes! Whoop whoop, still a highlight of my career all these years later.

From there I went on to perform both on and off Broadway before moving to London to continue my career and earn an ALAM Diploma from LAMDA.

In the past I have taught and coached acting to both adults and children at StageCoach in the UK, at the Irish Film Academy in Cork and privately one-to-one. I am super excited to offer one-to-one classes via Zoom because I know Uta’s technique not only lends itself to online training but that it will actually be even easier for students than coming into a studio/class environment.

Technically, in terms of set & props it will be ideal for students (I used to have to schlep everything from Hell’s Kitchen, where I lived, down & back to Greenwich Village for every class) and for anyone who is in any way nervous about performing in front of others, that stumbling block is completely removed.

It will be just you and me and all the freedom in the world to experiment and make as many mistakes as possible. I’m a big fan of mistakes, let’s make loads, let’s have fun, let’s experiment and try it all because that my friends is how you learn and grow as an actor.

What Uta Hagen said about Pauline

Pauline O’Driscoll is a committed, hard-working and extraordinarily gifted actress. I highly recommend her.  Her work is widely varied on characters ranging from classical to contemporary. She will be an invaluable asset to any serious theatre or film work.

What students say about Pauline as an Acting Coach:

I was lucky enough to study with Pauline a few years ago at the Irish Film Academy in Cork. I always looked forward to Pauline’s classes and learned from both participating in the exercises and observing Pauline working with others.

Like Pauline, the Uta Hagen technique is very practical. It’s all about learning to behave (or “act”) realistically in imaginary circumstances. Self-observation and preparation are key to creating authentic action and natural behaviour. And Pauline is great at getting you to think of the specifics of your actions.

I’m absolutely delighted to hear that Pauline is bringing the Uta Hagen Technique to Ireland, and look forward to working with her again!